From Figure Skating to Financial Regulation

The year is 2013, and Julian Lagus spends his days skating. He has already had a long career as an elite figure skater in Finland and abroad. His achievements include the Nordic championship in the junior men category and representing Finland in the European Youth Olympic Festival in 2009. Not long after, Julian decides to hang up his skates and enrol in law school.

‘It was a complete 180 in life’, Julian says about starting this new path.

‘What I like about working in a large law firm is how international it is. We have many cross-border assignments, and I got to work on them from my very first day as a trainee. The transition from the international sports arena to the largely international field of financial regulation was ultimately quite smooth’, Julian says.

Sustainability in the Legal Services Industry

Despite changing career tracks, Julian never completely abandoned skating. During his studies, Julian coached younger skaters in Finland and abroad. After he graduation, skating took more of a back seat, but in 2020 the Finnish Figure Skating Association asked Julian to join its new ethics committee.

‘The sports world has many rules, but there is room to improve their implementation. Both athletes and coaches tend share a certain pedantic and perfectionist streak. However, the hard work to achieve great results has to be done in the spirit of fair and responsible sportsmanship. This is a great opportunity to help put the ethical side of the sport in good order. While there is much work to be done, I am confident that we are already moving in the right direction’, Julian says.

The importance of sustainability and responsibility is increasing quickly in business as well, which Julian sees in his work.

‘The EU is enacting new regulations all the time, for example, relating to sustainable financing. I have learned to see how the financial industry can support the fight against climate change and promote a more sustainable society. This realisation has gotten me very excited. I find it fascinating to think about how to weave sustainability into traditional capital market and financial law.’

Aiming for the Top

Colleagues describe Julian as a friendly, cheerful and ambitions person. He is an early riser, and often visits the office gym before starting work.

I am motivated by complex assignments that challenge me. Financial and insurance regulation is not boilerplate work but is genuinely challenging. The work can sometimes even be a somewhat scholarly grind, as it requires a deep immersion in the content and underlying logic of regulation’, Julian says.

When it comes to C&S as an employer, Julian feels the highlights are the firm’s culture of teamwork, inclusivity and maintaining a positive attitude:

I feel like I have the best colleagues in the business, which makes work pleasant. I can always bounce questions off of the top experts in any field of law, as they are all in house. The firm also puts a lot of effort into making sure everyone has a good experience. We do many things, both large and small, together.’ 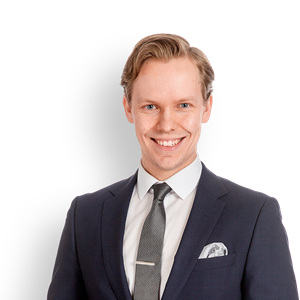 Julian Lagus
Associate
+358 20 7765 452
julian.lagus@castren.fi
Share this:
Previous
Learning as Fuel for a Career
Next
The Most Important Characteristics for a Lawyer are Curiosity and the Desire to Learn New Things
See all